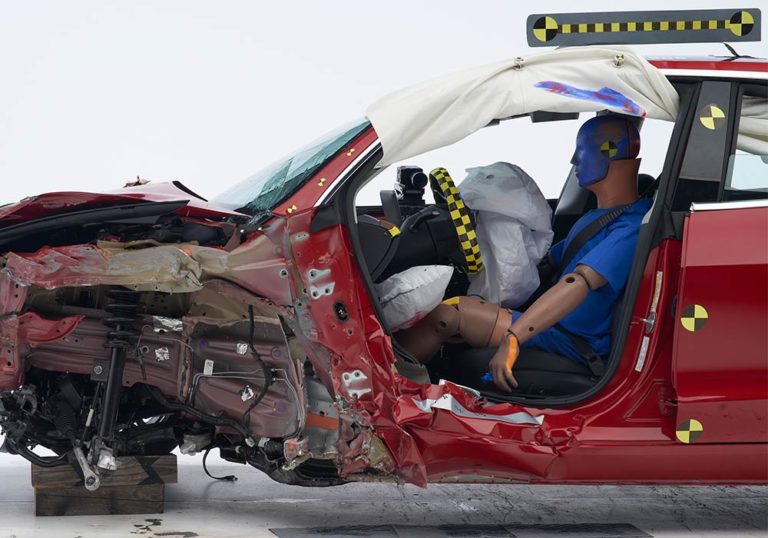 ARLINGTON, Va. — Tesla has picked up its first award from the Insurance Institute for Highway Safety, as the 2019 Model 3, its less expensive sedan, qualifies for TOP SAFETY PICK+.

The Model 3 joins one other all-electric plug-in vehicle, the Audi e-tron, in the IIHS winner’s circle. A hydrogen fuel cell vehicle, the Hyundai Nexo, also recently qualified for an award.

The Chevrolet Bolt, an all-electric small car, misses out because its headlights cause too much glare, earning a poor rating.

“Vehicles with alternative powertrains have come into their own,” IIHS Chief Research Officer David Zuby says. “There’s no need to trade away safety for a lower carbon footprint when choosing a vehicle.”

To earn a 2019 TOP SAFETY PICK award, a vehicle must earn good ratings in the driver-side small overlap front, moderate overlap front, side, roof strength and head restraint tests, as well as a good or acceptable rating in the passenger-side small overlap test. It also needs an available front crash prevention system with an advanced or superior rating and good- or acceptable-rated headlights.

For the top-tier award, TOP SAFETY PICK+, good ratings are required in the passenger-side small overlap test and the headlight evaluation.

The Tesla Model 3, a midsize luxury car that is the most affordable of Tesla’s three vehicles, earns good ratings across the board for crashworthiness. Its standard front crash prevention system earns a superior rating, avoiding collisions in both the 12 mph and 25 mph IIHS track tests, and its only available headlights earn a good rating.

The Model 3’s structure held up well in one of the Institute’s most challenging crash tests, the driver-side small overlap front test. Intrusion of 8 inches at the lower door-hinge pillar contributed to a moderate risk of injury to the driver’s lower leg, as indicated by measures taken from the dummy. No other injury risk was recorded, and the front and side airbags and the seat belt worked well to control the dummy’s movement during the crash.

The Bolt, a small car, also performed well in the IIHS crashworthiness tests. It earns good ratings in all of them except for the passenger-side small overlap test, in which it rates acceptable.

In that test, the passenger dummy’s movement was less than ideal. After hitting the frontal airbag during the test, the dummy’s head moved toward the gap between the frontal and side airbags, leaving it vulnerable to contact with hard parts of the vehicle interior.

The acceptable passenger-side rating would have been enough for the Bolt to earn a TOP SAFETY PICK award when equipped with optional front crash prevention, but the Bolt’s only available headlights earn a poor rating, primarily because of excessive glare to oncoming drivers.

The Model 3 is the second plug-in vehicle with no gas engine to earn the 2019 TOP SAFETY PICK+ award after the Audi e-tron, a large SUV. The e-tron qualifies for the award with standard equipment.

Meanwhile, the Hyundai Nexo became the first hydrogen fuel cell vehicle to earn an award from IIHS over the summer. Like the Model 3 and the e-tron, the Nexo, a midsize luxury SUV, qualifies for TOP SAFETY PICK+ based on standard equipment.

The Nexo is one of three fuel cell vehicles that are commercially available in California. California has promoted the technology and is the only state with a network of retail hydrogen fueling stations.