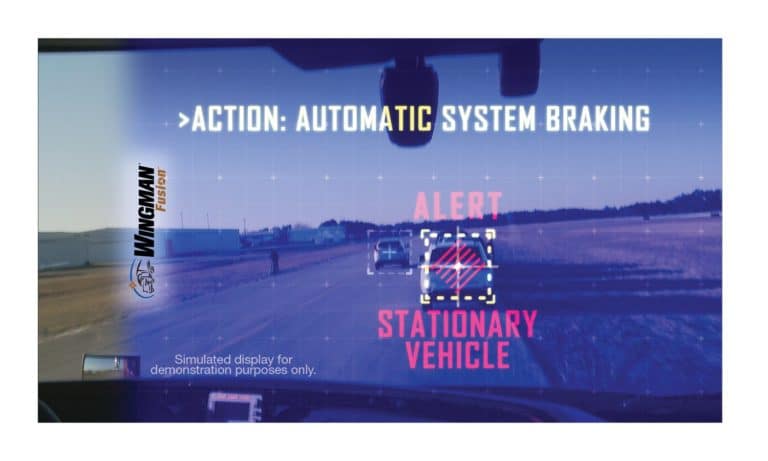 ELYRIA, Ohio – May 30, 2019 – Every day, a growing number of fleets and owner-operators adopt the robust Bendix® Wingman® family of solutions, which is marking a decade of innovation, progress, and helping to enhance the safety of vehicles and roadways across North America.

“When we introduced the earliest generation of our Wingman product, we listened to what our customers were saying and knew it had the potential to provide significant value for fleets,” said Scott Burkhart, Bendix vice president – sales, marketing, and business development. “Our aim was to provide another effective building block that helped to deliver total lower cost of ownership and to maximize vehicle safety, reliability, and performance for fleets across North America. Ten years later, that approach is still driving us, as the current Wingman – Bendix® Wingman® Fusion™ – continues to evolve, and as we work closely with partners across the industry to shape tomorrow’s transportation.”

“The foundational technology of all the Wingman systems goes back even further, to 2005, when we introduced the Bendix® ESP® Electronic Stability Program, which was North America’s first widely available commercial vehicle full-stability system,” said TJ Thomas, Bendix director of marketing and customer solutions – Controls. “With Bendix ESP in place, it was clear that additional safety advancements could be brought to market using full stability as the base. The vision of using ESP as the cornerstone to build active cruise control, collision mitigation, and Bendix® Wingman® Fusion™ was all there very early on.”

From Then to Now

“When Wingman® Advanced™ came along in 2011, that’s really where we saw a big jump in adoption, because it works whether or not cruise control is activated – and again, we improved all the component technologies along the way as well,” Thomas said. “Once fleets saw it in action, and saw that it worked, and saw a reduction in rear-end accidents, they realized there’s a direct return on investment.”

WingmanFusionsaw a similar advancement in its feature set: Bendix took something good and made it better, adding a forward-facing camera, deeper system integration, and new features including Lane Departure Warning, overspeed alerts and intervention, and – one of the crucial keys as the system became more complex – alert prioritization.

What positions Fusion at the leading edge of safety and driver assistance is its integration of information from multiple sources “fused” together, and not just in parallel.

Like its predecessor, WingmanFusionis available on almost all major commercial truck brands, and has achieved standard position on many models. Across North America, a growing number of fleets of varying size, location, and vocation spec Wingman Fusion, reporting significant reductions in rear-end collisions – as much as 90 percent – and decreased severity of those that did occur.

Also speaking to the effectiveness of systems like Bendix® Wingman® is the National Transportation Safety Board’s (NTSB) annual “Most Wanted List of Transportation Safety Improvements.” The latest installment, released in February, picks up a goal it has named in previous years: to increase implementation of collision avoidance systems in all new highway vehicles. In this year’s list, the NTSB recommends that commercial vehicle manufacturers include forward collision avoidance system as standard, noting that the number of combination trucks involved in fatal crashes in 2017 increased nearly 6 percent from 2016.

On the Road, and around the Next Bend

“The men and women driving these trucks are also sharing positive feedback, including higher satisfaction with Bendix’s radar-and-camera systems than with radar-only technologies,” Thomas said. “And that’s not surprising, as more information about a situation – delivered into the system by two sensors instead of one – typically enables a more accurate reaction to a specific situation.”

The next generation of Wingman® Fusion™, launched in 2018, helps drivers deal with even more uncertainties on the road, adding highway departure braking, ACB (Active Cruise with Braking) Stop & Driver Go™, ACB Auto-Resume™, and multi-lane emergency braking to its features, along with even more enhanced collision mitigation and braking capabilities. Fusion can also now provide full braking power on the tractor, compared with the two-thirds power previously possible, along with pulsing air back to the trailer to provide trailer braking, whether the trailer has an ABS/TRSP unit. Combined with improved sensor and data analysis, this means that in many emergency situations, the system can reduce a vehicle’s speed by as much as 50 miles per hour.

Never resting in its development cycle, the company notes that the latest generation of WingmanFusionis poised for release later in 2019.

And to help keep fleets equipped with the latest safety technologies, Bendix® Wingman® Advanced™ and WingmanFusionare available for retrofitting on vehicles already equipped with Bendix® ESP®. This enhances safety while also contributing to an improved driver experience vehicle to vehicle.

Bendix emphasizes that no technology can replace a safe, alert, professional driver practicing safe driving habits, supported by proactive, ongoing driver training. Active safety systems are not intended to enable or encourage aggressive driving, and responsibility for safe vehicle operation remains with the driver at all times.

“Ten years after Bendix introduced Wingman® to the drivers and roads of North America,” Burkhart said, “what was once new and felt experimental is now a combination of proven technologies making a difference every day and helping to pave the way toward a future of safer vehicles and highways for everyone.”