By The Brake ReportDecember 19, 2019No Comments2 Mins Read 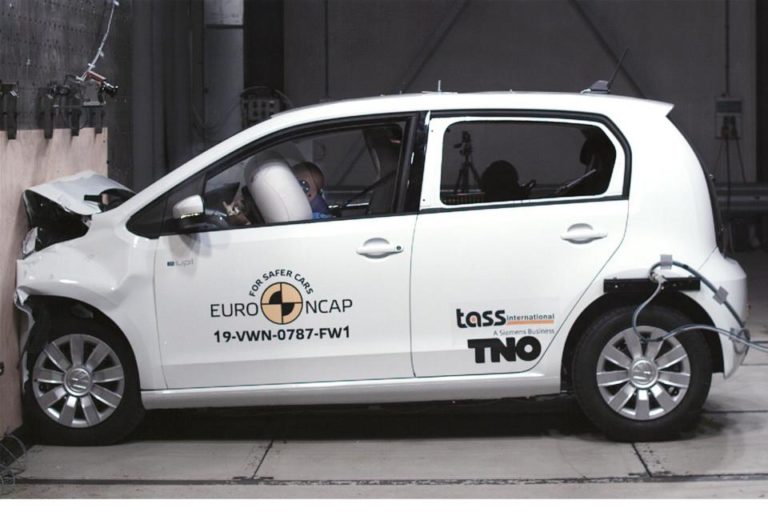 The Volkswagen up! city car has scored three stars in the latest round of Euro NCAP crash test results, down from the maximum five stars it was awarded when first assessed in 2011, with removal of the standard autonomous emergency braking system (AEB) as a primary reason.

While Euro NCAP tested the electric e-up!, the new score also applies to the facelifted gasoline-powered up! due in the new year, as well as the mechanically identical SEAT Mii and Skoda Citigo.

Much of the blame for the two-star loss lies with the up!’s reduced safety-assist score and changing crash-test criteria. In 2011 the up! scored 86 per cent for safety assist technology, partly thanks to its seatbelt reminder and electronic stability control systems. In 2019 it was awarded just 55 per cent in the safety-assist category.

NCAP’s crash safety experts criticized Volkswagen’s decision to remove AEB from the up!’s options list, although lane keep assist – a feature that was not previously available – is now fitted as standard.

Matthew Avery, director of research at Thatcham, said: “the withdrawal of its City AEB system is a major shortcoming, not least because consumers will be considering it as an affordable electric city-car option. The lack of an AEB system to avoid or mitigate collisions in a city-driving environment is therefore a significant omission.”

Avery added that while the up! “still offers a respectable level of passive safety”, its overall score was “disappointing.”

Commenting on the up!’s Euro NCAP downgrade, a spokesperson from Volkswagen said: “The up! was reassessed this year and achieved three stars, as we hoped it would. Excellent passenger protection and Lane Assist installed as standard – as well as curtain and side airbags – make it one of the safest vehicles in its class. Due to the fact that the test conditions have become significantly tougher in recent years, three stars can be considered a very good rating.”

Autonomous emergency braking works by scanning the road ahead for obstacles, first warning the driver before braking automatically they take no action to avoid a potential collision.