In the fourth stage of  the PRORETA research project, the technology company Continental  and TU Darmstadt have developed a machine-learning vehicle  system designed to support drivers in urban traffic and have installed it in a prototype. Data from radar sensors helps drivers to assess the traffic situation when turning left, entering a roundabout or at right-before-left intersections. Machine-learning has played a key role in the three-and-a-half-year research project. Algorithms create an always up-to-date driver profile based on a range of vehicle data, allowing them to adapt the driving maneuver recommendations given by the City Assistant System in line with the driving style.

The task of the PRORETA project was highly complex. “The goal of collaboration between our institutes and Continental during the course of PRORETA 4 was to use adaptive systems as a mean of developing solutions that have not yet been addressed due to the lack of adaptability. The results of our work will help to further increase safety both within the vehicle and for other road users,” says Professor Hermann Winner, Director of the Institute of Automotive Engineering at TU Darmstadt. Acting like a good passenger, an advanced driver assistance system must analyze the driver’s style of driving and, in turn, their subjective sense of safety or risk so that, in
complex traffic situations, it can give the driver recommendations that are also met with a high degree of acceptance. The driving profile is created quickly and accurately on the basis of a machine-learning process. For this, a range of data recorded during journeys is evaluated. Acceleration, yaw rates, braking and lateral acceleration in particular give the algorithm an idea of what type of driver is behind the wheel.

Extensive test drives with testers showed that the algorithms used in the City Assistant System allow conclusions to be drawn about the current driving style within three to five driving maneuvers. The system can therefore assign the driver to one or more clusters of driving profiles, meaning that the City Assistant System can then offer
highly personalized driving recommendations.

Machine-learned algorithms are becoming increasingly common in vehicle systems. While the number of vehicle system units utilizing artificial intelligence stood at 7 million in 2015, this figure is expected to increase to 225 million by 2025. Efficient machine-learned algorithms are mostly highly complex models that, in their raw form and like a black box, either are hard to interpret or cannot be interpreted at all by humans. This poses particular challenges for ensuring the reliability of advanced driver assistance systems, which is why a safety approval strategy has been developed as part of the algorithm selection process for advanced driver assistance systems. During the course of PRORETA 4, various methods for reducing the number of test cases for learned algorithms were identified; these will now be subject to further research.

“The driver has to develop confidence in the City Assistant System and its recommendations. Trust is the basis for the acceptance of advanced driver assistance systems, which in turn are an essential component of accident-free driving,” says Ralph Lauxmann, Head of Systems & Technology at Continental’s Chassis & Safety division. Based on the driving profile, the system monitors the time windows for driving recommendations – for example, with the left-turn assistant. This determines how big the gaps in the oncoming traffic are for a left turn based on data about the vehicle’s own position as well as the speed of and distance between oncoming vehicles. The task of object detection is carried out by ready-for-production long- and short-range radars installed on the sides of a vehicle. These are already in use in many assistance systems today, such as Adaptive Cruise Control or Blind Spot Detection. 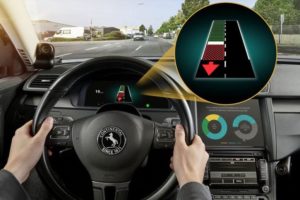 The driver does not require assistance when the gaps in the oncoming traffic are extremely large, only when the necessary time window for safe turning is critical or it is difficult for the driver to estimate it accurately. This may be the case at night or in poor visibility as well as with inexperienced or elderly drivers. In heavy traffic, the City Assistant System reduces the stress of finding gaps and informs the driver when a sufficiently large gap is approaching. Test drives conducted during the course of PRORETA 4 identified a time window of between five and seven seconds, during which the system can assist with recommendations. The lower value with smaller gaps in oncoming traffic applies to a more dynamic style of driving, while the upper value applies to extremely defensive drivers. In both cases, however, it is guaranteed that the driver can complete the turn safely.

The same principle applies to the second application: entering a roundabout. Here, too, the system uses the vehicle and environment sensors to determine whether a gap in traffic is large enough and whether it makes sense, in view of the driver profile, to recommend that the driver enters the roundabout or waits for a larger gap.

The driving recommendation can be given in different ways. “Assistance systems whose warnings are not perceived as useful are often viewed by motorists as annoying and are even ignored or switched off. This is why we are supporting the approach of an adaptive advanced driver assistance system featuring a special interaction concept. Visual, acoustic and haptic signals display the recommendations for the driver as intuitively as possible,” says Dr. Karsten Michels, Head of Systems & Technology at Continental’s Interior division. Most obvious is the visual display with a big green or red arrow, but it would also be possible to configure a vibration in the seat edge or other haptic signals.

Another complex task for the City Assistant System is dealing with right-before-left intersections. Here, the system first recognizes from a map, GPS and self-determined location data that the driver is approaching such a junction. With the help of the interior camera, the system analyzes whether the driver has detected incoming traffic that is to be given priority. The system checks whether the driver has actually turned their head to the right at the intersection and registered the other road user; this process of registering other road users takes 250 to 500 milliseconds. In more dangerous situations, the system can alert the driver through signals. The system can also
establish whether the driver has acted correctly and communicate its verdict to the driver. In a version ready for series production, the City Assistant System could also feature an emergency brake function for the applications described.

The more accurately the position of one’s own vehicle is known; the more reliably advanced driver assistance systems can make decisions in complex traffic situations. One component of PRORETA 4 was therefore a camera-based system for automatically mapping landmarks such as prominent points on buildings or infrastructure. These landmarks will later be recognized by the vehicle camera, allowing for even more accurate localization of the vehicle than is possible with GPS or navigation data. In this long-term Simultaneous Localization and Mapping (SLAM) method, landmarks along frequently traveled routes are detected, evaluated and stored in a data memory in the vehicle. This makes position detection possible to an accuracy of less than one meter along these routes.

History of the PRORETA project by Continental and TU Darmstadt

Earlier in The Brake Report: Will safer cars cause more crashes?