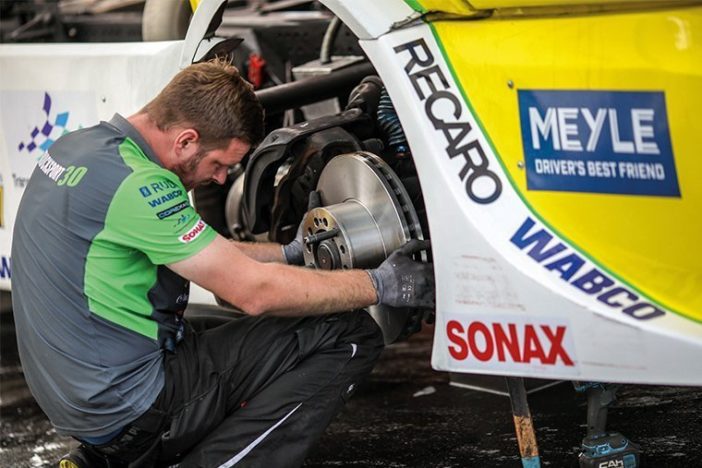 NURBURGRING, Germany–The Hamburg-based manufacturer MEYLE has been a technical cooperation partner in the FIA European Truck Racing Championship for many years. The commitment goes far beyond normal sponsoring: In addition to the technical equipment of the race truck with high-quality MEYLE spare parts, the transfer of know-how between the MEYLE engineers and the motorsport team is the main focus.

Through the performance analysis of the truck parts under extreme conditions in racing operation, MEYLE gains important insights for product development. In return, MEYLE engineers are available as technical partners on race weekends and in workshops for Sascha Lenz and his team – a true win-win situation for both sides. Especially on the last race weekend at the 34th ADAC International ADAC Truck Grand Prix the brake components had to deliver top performances on the demanding track at the Nürburgring.

For years, the Nürburgring weekend has been the highlight in the racing calendar of the FIA European Truck Racing Championship and attracted more than 140,000 visitors this year as well. And the performance of the team around driver Sascha Lenz was impressive: While he was able to defend his strong fourth place from start to finish in the first race, the spectators in the second race on Saturday saw a real catch up – from sixth place, the MAN pilot confidently took second place and thus a podium place this season.

The 32-year-old also finished the third race in fourth place. The fourth and last race of the weekend cost valuable seconds and points in the fight for positions in the top 10 – nevertheless Sascha Lenz finished the weekend in the overall standings with a total of 105 points and thus starts with a strong 6th place into the race weekend in Most in the Czech Republic from 31 August to 1 September 2019.

As technical cooperation partner for the SL Trucksport 30 team, MEYLE provides the team with know-how during the race weekends and also delivers parts for the installation in the more than 1,150-hp MAN truck. A real “stress test” for the parts. An example of the conditions under which MEYLE brake discs and pads are tested: During a race, the trucks brake very hard, especially before the corners – sometimes from around 160 to only 40 to 50 kilometers per hour.

The brakes can reach extreme temperatures in the shortest possible time, making water cooling of the brake discs indispensable. Therefore, the components must be able to withstand the enormous temperature fluctuations without glazing the surfaces and, as a result, the braking distance is severely restricted. Driver Sascha Lenz is well aware of this and has therefore relied on MEYLE brake discs for many years: “I used MEYLE brake discs after the previous discs broke during the race and this cost us valuable time. I am completely convinced of the MEYLE discs – they deliver a top performance,” reports the racing driver.

And the loads on the parts during the race are high: “The planned temperature during braking is between 350 and 450 degrees, which is where they perform best. But they also have to withstand peak temperatures of up to 680 degrees during emergency braking – and they do that without any problems!”

The direct feedback from the races provides valuable insights for optimising the MEYLE truck range and the specifications of the parts. If the parts survive a truck race without damage, driving them under normal conditions is no problem at all. And MEYLE parts even survive several race weekends without damage, explains Stefan Honens, race engineer with the SL Trucksport team: “Brakes have to withstand a lot – from training to test drives to the four races, they are used for almost 500 kilometres every weekend. The fact that the MEYLE parts can survive several weekends speaks for the enormously high quality”.

Tested by the strongest: from race track to road

In 2014 the MEYLE-ORIGINAL brake discs, for example, have been optimised in terms of their material composition. The further developed brake discs are currently being installed in the MAN race truck from SL Trucksport 30 and will continue to be put through their paces on the race track.

Since 2018, the new MEYLE-PD brake pads have been available on the independent aftermarket for the first time as parts that have been completely redeveloped through cooperation with a racing team. The brake pads feature an optimized, low-wear friction material mix: With the aid of a special pad friction mixture that has been tested in multi-stage processes, braking performance can be improved and braking distance reduced. The MEYLE-PD brake pads thus bring even trucks weighing tons to a standstill in the shortest possible time in a stable and safe manner.

Learn more about the MEYLE Sponsoring Program in the MEYLE Performance Press Kit and via www.meyle.com.