Editor’s note: This is Part 2 of an ongoing series on counterfeit brake parts. Read Part 1 here.

If you’re confused about how to attach the Brembo caliper covers, you can watch instructional videos on YouTube. One of them has almost 400,000 views. Another has more than 130,000 views. 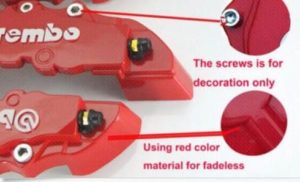 From Brembo’s perspective, these cheap plastic caliper covers are just the tip of a very large iceberg, a vast world of illicit brake parts that bear the Brembo name but aren’t produced by the Italian company.

“Unfortunately, counterfeiting of Brembo’s brakes poses an unusually high risk for consumers, as they are safety components. If you wear a counterfeit t-shirt the worst thing that can happen is that the fabric is ruined during the first wash. But if you have a fake brake system, it could fail during braking and lead to serious injury or even death,” says Paolo Rezzaghi, Brembo IPR Manager.

[bctt tweet=”Unfortunately, counterfeiting of Brembo’s brakes poses an unusually high risk for consumers, as they are safety components.” username=”TheBrakeReport”]

Because Brembo is a popular, upscale brand, it’s a favorite of counterfeiters. The company estimates that it loses at least €2 million a year to counterfeiters, but the real value is impossible to assess since it includes brand dilution and confusion.

Across different industries, some brands that are subject to counterfeiting try to hide the extent of the problem. They are afraid that consumers will stop buying products with the brand on them if they think it might be counterfeit. Long term, this attitude only helps counterfeiters and hurts consumers.

Brembo takes a more aggressive, proactive approach to fighting fakes. One way it does so is through supporting Rezzaghi with a staff of around 20 people. This team scours the Internet but also works in locations where counterfeit products are made.

For people who want to make sure they they are buying the real thing, Brembo makes it easy. The company includes a hologram on its brake discs and a QR code on packaging that users can scan to check if the product is genuine.

For Brembo’s High Performance line, an anti-counterfeiting scratch card is inside the box. Brembo describes the card this way: “The card is inside a sealed wallet with the instructions. The purchasers have to scratch the silver strip on the back and uncover the six digit code that has to be entered in the www.original.brembo.com website to find out if the part is genuine. Unlike other scratch cards, the chances of success with Brembo’s card is 100 percent. And the prize? Perfect, long-lasting braking in all conditions.”

In addition, Brembo recommends that consumers buy “components from an original equipment manufacturer or from an authorized Brembo dealer. The dealer can be verified by speaking with either our corporate office or our exclusive importers located in countries worldwide.”

In the fight to stop counterfeits, one problem is a lack of standardized language to describe the murky, complex world of counterfeits, which span from total rip-offs to almost real products. Brembo’s in-house categories might offer a solution for the rest of the brake industry.

Rezzaghi goes into detail while also describing the universe of Brembo fakes:

“Then there are Level 1 components, mostly represented by master cylinders and calipers for motorcycles. These products are typically made in Indonesia, Malaysia, and Thailand. We usually find that Level 1 products are very bad in terms of material, performance, design and most of all safety.

“Level 2 products include fake calipers for cars. They are typically made in China and Taiwan. Level 2 products appear to be of better quality, however, they are usually not comparable in performance or detail to that of the original products. None of these products have not gone through the battery of qualification tests to which Brembo’s brake systems are subject.

“Finally, we have Level 3 counterfeit products, which include repainted calipers rebranded as Brembo. These products may have originally come from an OEM or OES application but, during their life have changed color, logo, and application.

“Level 3 products could have originally been Brembo products. However, using these calipers on an application for which they were not originally intended could be very dangerous. Again, when Brembo designs and manufactures a caliper, we work closely with the manufacturer of the car, truck, or motorbike utilizing the detailed specifications and projected performance of the vehicle. That caliper undergoes numerous static and dynamic tests, including road testing, to confirm its adequacy for the application. Just because the caliper works on one vehicle, it may not work on another.”

For all of Brembo’s efforts to fight counterfeits, the problem is never going to go away completely without a change in consumer attitudes.

The BRAKE Report reached out to one of the YouTube users who posted an instructional video for installing Brembo caliper covers, notifying him that the calipers were fake and asking for more details.

“There isn’t much to say really other than the caliper covers are still on my dad’s vehicle and he loves them,” the individual, who goes by FL4ME WITH A 4 on YouTube, replied.

“I offered to paint them for him but just didn’t have the time to strip the calipers and a cover was the best option, we were not looking to make the brakes look like Brembos in any way but this was the only cover made at the time and they just looked better than rusty calipers.”

This is Part 2 of an ongoing series. Read Part 1 here. Look for Part 3 later this week.