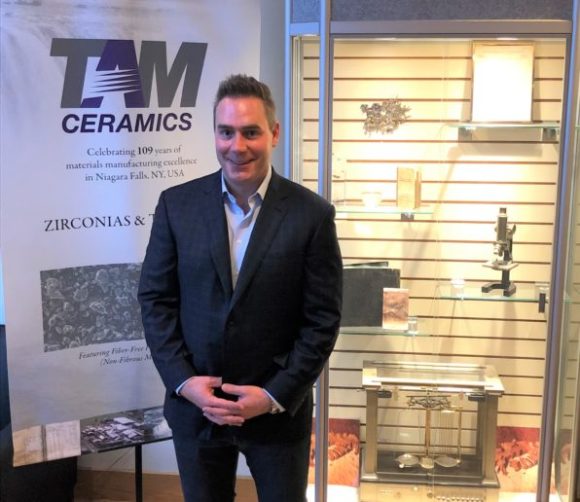 George Bilkey, president of Tam Ceramics, stands next to tools and notebooks used by the company's founders.

TAM CERAMICS AT A GLANCE

Low-cost hydroelectric power. That’s what drew TAM Ceramics’ founders to the banks of the Niagara River, where the company was founded in 1906.

After 112 years, the company is still located at the same address and still benefits from cheap electricity.

“We do ceramic processing,” explains George Bilkey, the president of TAM Ceramics, “bringing in unrefined materials – simple compounds – and processing them into more advanced compounds that have specific properties.”

It’s a power-intensive process. “We bring in raw materials, different ores and minerals and semi-processed raw materials, we mix them together, blend them. We will heat treat them, electrically fuse them,” Bilkey says, “crush them, screen them, jet mill, acid treat, manipulate the surface chemistry.”

He specifically mentions the company’s electric arc furnaces, which are used to make zirconia. That low-cost electricity comes in handy when the company pumps 12,000 kilovolts through the raw material to force it to melt, which occurs at about 5,000 degrees Fahrenheit, half the temperature of the surface of the sun.

The company’s major product in its early days was pigment-grade titanium dioxide, which enabled paint companies to create an alternative to lead-based paints. In 1920 National Lead, the maker of Dutch Boy paint, bought TAM Ceramics.

For years, friction was an afterthought. That started to change when Bilkey became president. The move to replace copper in brake pads further accelerated TAM Ceramics’ friction business. The company has invested in a dedicated market manager for friction and a dedicated inside technical sales engineer.

“Our products primarily fit into two categories,” Bilkey says. “The friction abrasives are pretty straightforward. The friction modifiers are a little more elusive.”

The friction modifier market is changing rapidly.  “I think there will be a lot of new materials. That could mean replacing copper, replacing sulfides,” Bilkey says. Friction modifiers are “things that aren’t abrasives, lubricants, or fillers.”

According to Bilkey, TAM Ceramics is focused on working hand-in-hand with friction companies to create new formulas for brake pads.

“We’re not going to have a lot of growth developing me-too products,” he says, referring to low-cost, commoditized formulations. “Additionally, we’re learning that making a me-too product does not help our customers with their business objectives, because they’re looking at the next-generation brake pad and they’re not looking at their existing formulations for the next generation.”

“Our conversations with our customers are morphing from talking to procurement individuals to talking to decision-makers and lead formulators,” he says. “We’re trying to understand where their companies are heading.”

“We’re going to see more and more of the whole brake pad composition be inclusive of ceramics,” Bilkey predicts.

“We’re going to see more and more of the whole brake pad composition be inclusive of ceramics.”

In 2007, the company had gone through several ownership changes and was limping toward closure as an underperforming part of Ferro Corporation. It was sold to a holding company that gave the reins to Bilkey.

In 2010, Bilkey and his business partner bought the company. It now employs about 100 people.

For Bilkey, being one of the owners means he can run TAM Ceramics like a family business, with autonomy to control the culture. “We hire people with good attitudes. We’re fair, we’re responsive,” adding, “we make sure morale is high in the company, and that results in performance for our customers.”

TAM Ceramics is so close to Niagara Falls that on same days, employees can actually hear the waterfall. “It’s a great little perk,” Bilkey says before adding that he’s as likely to take visitors, many of whom have technical expertise, to the other nearby attraction — the massive hydroelectric plant that makes TAM Ceramics possible. “That’s pretty impressive as well.”