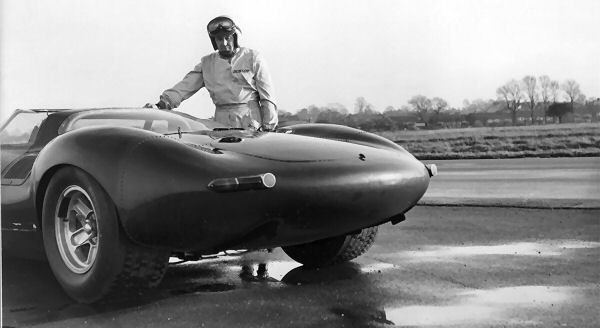 DETROIT, Mich.–Norman Dewis, the longtime development driver for Jaguar who had a hand in creating everything from the C-Type to the XJ6, and who played a role in the introduction of disc brakes and mono-coque bodies on both production and race cars, passed away at the age of 98.

Dewis’ remarkable career spanned almost every cool Jaguar ever made: the C-Type, three-time-Le Mans-winning D-Type, the most beautiful car in the world E-Type and the XJ Saloon, what you and I would call a sedan.

It was his work in developing the disc brake that won him the OBE, or The Most Excellent Order of the British Empire. It was a dangerous job that often saw him going down the company’s secret test track that had been set up at a former RAF aerodrome near Wolverhampton.

“They’d been fitted to an XK120 and were terrible things, burning out, boiling the fluid,” Dewis told Telegraph Cars in February 2014. “I was asked to help out and said we needed to fit them to the fastest car we made, the C-Type.”

That was in January 1952, according to The Telegraph.

“Oh yes, it was dangerous,” Dewis recalled. “Sometimes I’d be driving at 130 mph and there’d be no brakes. The pedal would sink to the floor and I’d have to take to the grass.”

It was exciting stuff, but his career saw much more interesting work.

Dewis trained as a rear gunner in the RAF during WWII, then worked at a couple other carmakers before joining Jaguar in 1952. His tenure there as both engineer and test driver would last until 1985, when he became essentially an ambassador and revered elder statesman for the brand.

At Jag he worked on or developed everything from the XK140 and 150 to the aforementioned C- D- and E-Type and the XKSS sports cars, as well as coupes like the XJS, and “saloons” like the Mk2 and XJ6. But it was his favorite car – the stunning XJ13 – that almost killed him. He was on the banking at MIRA, the high-speed test facility in Warwickshire, when a rear tire blew out, resulting in a triple-barrel roll through the infield mud. The car was destroyed but Dewis was – remarkably – back at work the next day. Undaunted, he went on to tally up more than a million miles of testing at MIRA, all in Jaguars.

He had experience in motorsports as well, co-driving with Stirling Moss in the 1952 Mille Miglia and setting a top speed of 172.412 mph in a special streamlined XK120 in 1953. He raced a D-Type at Le Mans in 1955, pulling off a pass of Karl Kling’s Mercedes 300SLR on the Mulsanne Straight at 192 mph.

Dewis had planned to spend his 100th birthday lapping MIRA in an XJ13 at 100 mph, he once told Autocar in the UK. But he won’t be doing that.

Dewis was not only a living link to Jaguar’s great cars, but to its people. Dewis was one of the last remaining Jag employees who knew company founder Sir William Lyons, for instance. It was that living vault of history that Dewis shared so freely in the last decades of his life, and for which many who met him will be forever grateful.