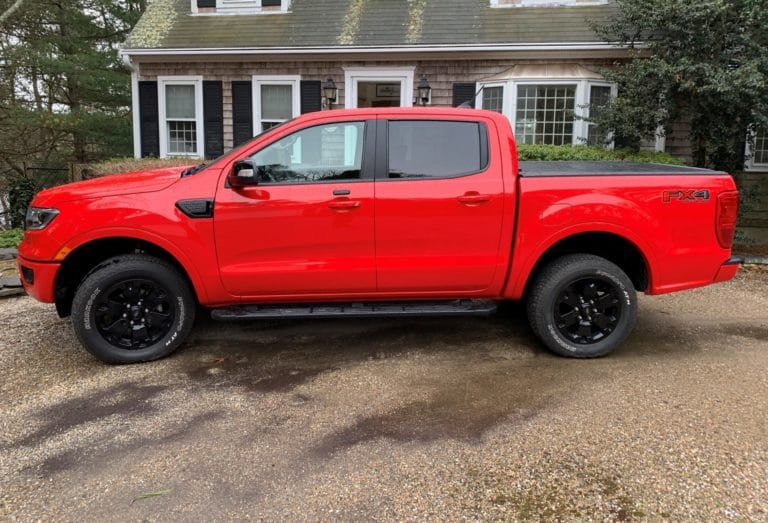 CHATHAM, MA – As America’s full-size pickups grow larger with each new generation, mid-size models like the 2020 SuperCrew 4×4 Ford Ranger Lariat hits the sweet spot of the market for many, offering pickup versatility in reasonably spacious vehicle with better fuel economy and a lower price than their larger siblings.

The Ranger was Ford’s entry into the small/mid-size pickup market for three decades, but like Fiat Chrysler Automobiles (FCA) did with its Dodge Dakota, the Dearborn company dropped the line when the market swung overwhelmingly to full-size models.

The Ranger’s legacy has been secured in the company’s history as its platform served as the basis for the initial generation of the Ford Explorer, cornerstone of the company’s SUV lineup (and heir to the Ford Crown Victoria as the most popular police cruiser).

Top-of-the-range Lariats like we’ve been driving around the eerily quiet roads of Cape Cod this past week include all the above ADAS as well as a wealth of other features, many a part of the standard Technology Package (including adaptive cruise control).

You can command these, as well as the dual climate control functions, excellent navigation system and Bluetooth-linked phone, through the intuitive voice-activation system simply by pushing a steering-wheel-mounted button. Just say “find home,” for example, and the system will “take” you there. This means you can concentrate on your driving without having to look at or interact with the touch screen.

A second LCD screen behind the steering wheel is segmented allowing the driver to scroll through one screen (to the left of an analog speedometer) with vehicle operational information like digital speed, trip mileage, engine speed (tachometer), while the second display (to the right of the speedo) offers audio, navigation or phone information.

Built for on- and off-road tasks

Ranger’s muscular body features a high beltline, while a raked grille and windshield lend an athletic appearance and aid in aerodynamics and reduced wind noise.

As mentioned, underpinning this package are 265/60-R18 A/T (all terrain) tires on 18-inch black alloy rims (a part of the Black Package which also includes a bed liner and very-helpful running boards). These surround disc brakes (12.24×1.33-inch rotors/2-inch twin-piston caliper at the front, 12.12×0.94-inch/single-piston caliper at the rear with organic, non-asbestos pads all around) at all corners controlled by a four-channel anti-lock system (ABS) and AdvanceTrac electronic stability control.

The off-road package resulted in a ride that was a bit “jouncy” when the pavement was not particularly smooth, but overall cruising in the Ranger was pleasant – I know because my wife, normally critical of such things, said it was just fine when I brought up the subject. And, regardless of a bit of bounce, which comes with ANY off-road package, the Ranger was Ford quiet – much quieter than expected.

Ranger makes for a great piece of off-road gear, but also gets work done on the pavement. Its rugged steel bumper with available integrated trailer hitch receiver means towing campers, ATVs or watercraft is a breeze. Maximum payload is a stout 1,860 pounds while maximum towing comes in at 7,500 pounds.

Continuing with some numbers: under the hood is a 2.3-liter EcoBoost® four-cylinder engine which puts 270 horsepower and 310 pounds-feet of torque through the 10-speed automatic transmission. These work together to help this Ranger achieve 20 miles per gallon in city driving, 24 on the highway and 22 combined according to the federal National Highway Traffic Safety Association. We saw mid 20s consistently – once upon a time amazing numbers for a pickup truck!

SuperCrew versions like ours (four doors, seating for five) can handle 43.3 cubic-feet of cargo up to 1,560 pounds in the five-foot bed (SuperCab versions seat four, can handle 51.8 cubic feet and up to 1,860 pounds in a six-plus-foot cargo box).

Common amongst pickup lines offered by Ford, GM and FCA, you have variety of flavors to choose from so you can tailor a Ranger to your needs and desires: two or four doors; five or six-foot cargo boxes; rear-wheel or four-wheel drive; three models: XL, XLT and Lariat, and several packages.

A two-wheel-drive XL (two doors, six-foot box) anchors the line and has a base price of $24,410. Base price for a 2020 Ford Ranger Lariat SuperCrew 4×4 comes in at $38,675; our sample added things like the FX4 Off-Road package, Black Appearance package, trailer-tow package and a few other options to bring the as tested price to $45,715. In today’s market, that’s not an outrageous sum for the level of technology, comfort and capability offered by the Ranger. This is a pickup I could easily live with in the tight-driving environment of Cape Cod.