CHATHAM, Mass. – The 2023 Chevrolet Bolt EUV, one of the best values within the pantheon of electric vehicles offered to the American consumer, is an even better choice than last-year’s model as the list price has dropped by $6,300.

And Chevrolet made this unusual change – prices tend to go up year on year – without de-contenting: the 2023 Chevrolet Bolt EUV Premier we drove had the same premium level of features and equipment as its 2022 predecessor.

And all of this carries a price of $31,700; a significant offering amongst the EVs on the market.

SUV proportions in a subcompact EV equals an EUV

When Chevrolet launched the Bolt EUV for the 2022 model year, it brought us yet another non-car, non-truck category – the electric utility vehicle or EUV. Specifically, the General Motors brand described the design as having “SUV proportions.”

I am not sure what SUV proportions are beyond a two-box, upright stance with large windows – features which fit the small (169.5-inches long, 69.7 wide, 63.6 high), but roomy (96.5 cubic feet of passenger volume in part thanks to the relatively long 105.3-in. wheelbase) electric vehicle (EV) perfectly.

The roomy cabin is filled with features and amenities

The standard leather-appointed front seats are ventilated in addition to being heated; the driver’s seat has eight-way electric adjustment (including its lumbar support feature); automatic climate control system; wireless mobile device charger; WiFi hotspot and the features mentioned at the beginning of this article.

A 10.2-inch color touch screen is the centerpiece of the dashboard and the infotainment system which includes the wireless Apple CarPlay and Android Auto; SiriusXM satellite radio; Bluetooth streaming audio; AM/FM radio, and navigation.

The large screen also provides the images for the 360° HD Surround Vision which uses multiple cameras to display a digital overhead image of the area around the Bolt EUV along with HD Rear Vision Camera or front views. It works at low speed to help with parking in tight spots.

Fast charging, up to 240+ miles of range and solid platform with extensive ADAS

Motivating the 2023 Bolt EUV is a permanent magnet drive motor putting 200 horsepower and 266 pounds-feet of torque through a 7.05:1 final drive to the front wheels (FWD). Being an EV, the torque is available immediately, so the innocent-looking Bolt EUV can get up to 60 miles per hour from rest in less than seven seconds (according to Car and Driver) which was once the rate of a high-performance vehicle.

Providing the motor’s go juice is a 65 kWh Lithium-ion battery with a DC fast-charging capable system on board.

The ultimate is using a Level 3 DC fast charger which can provide up to 95 miles of range in 30 minutes allowing a road trip to continue in a reasonable time span.

For me, keeping the Bolt EUV charged was simple thanks to the Level 2 Autel MaxiCharger AC Wallbox Home unit installed in my garage. Plugging in at night ensured worry-free driving the next day (like most Americans, I rarely drive more than 40 miles in a day, well within the Bolt EUV’s range).

Helping keep this power under control is a front suspension of MacPherson-type struts with direct-acting stabilizer bar and at the rear, a compound crank (torsion beam) with coil springs.

The suspension incorporates the renowned GM StabilTrak electronic stability control system with traction control which automatically helps enhance control, particularly during emergency maneuvers, by adjusting the brakes and drive motor torque to help keep the vehicle on its intended path.

Like most EVs, the Bolt EUV allows for one-pedal (the accelerator) driving utilizing regenerative braking.

Activating one-pedal driving is easy – a simple push of the prominent console-mounted button turns on the system, confirmed by a bright green light in the button and in the instrument cluster. Once set, all the driver does is ease off the accelerator and the EV’s motor runs in reverse both slowing (all the way to a full stop if desired) and recharging the battery through the regenerative braking.

Vehicle control is also the purview the extensive advanced driver-assistance systems (ADAS) which are part of the Bolt EUV Premer.

These various systems and components translate into a comfortable, smooth ride for all occupants. And under the unassuming Bolt EUV skin, a perky, instantly responsive motor and simple but well-conceived and engineered chassis, mean this is a fun car to drive. It moves, it handles with aplomb. It might look like a basic five-door, but it performs more like a hot hatch (and one which will pass all gas stations!)

Priced to open the masses to electric motoring

All these numbers, systems, features morph into a comfortable place for up to four people to travel in near silence (another positive EV characteristic).

A couple would find the Bolt EUV Premier a near perfect vehicle for everyday living – it fits in any legitimate parking spot; can maneuver through tight traffic and small spaces (like Provincetown, Mass. at the height of the season), carry plenty of their stuff and do it for little money (in today’s terms).

The 2022 Chevrolet Bolt EUV was a value-oriented, full-featured EV we really liked. Chevy made one major change for 2023 – lowering its price – which makes it even better! 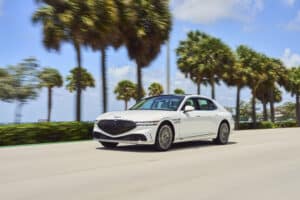