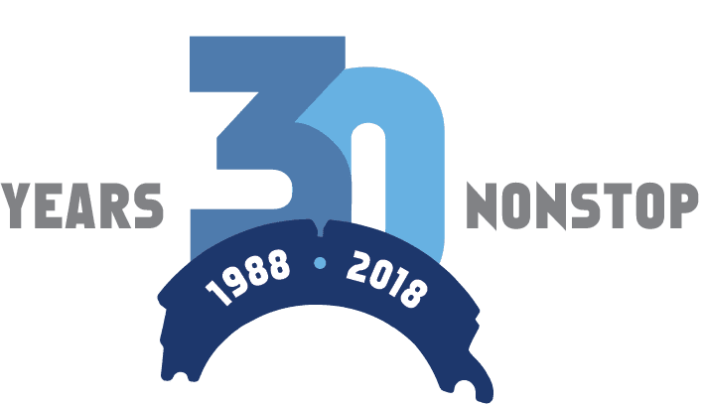 NeoBrake no sooner opened its doors in October of 1988 when an injured Los Angeles Dodgers’
baseball player named Kirk Gibson hobbled to the batter’s box and incomprehensibly hit a walk-off
home run to lift the Dodgers over the Oakland A’s in game one of the 1988 World Series.

“It was an incredible time,” recalls NeoBrake founder and President/CEO Rick Ballew. “We had just gotten things off the ground, then Kirk Gibson hits this home run when he can barely walk. I took it as a good sign, though, since we’re both from Michigan!”

Thirty years later, the Dodgers are making another playoff run, and NeoBrake is hitting home runs of their own. Ballew first came to Milwaukee in 1980 where he managed a reman shop for United Brake Systems. He went on to open facilities in Grand Rapids, St. Paul, and Fargo. But most notably, he was on the frontline rebuilding brakes when the use of asbestos was discontinued in 1982. It was at this time when the quest to formulate equally effective non-asbestos brakes began.

“I saw brake material go from consisting of three basic components to over eight with non-asbestos
formulas,” shared Ballew. “But no one has been able to replicate the wonders and performance of
asbestos fiber, but we’ve come as close as anyone, and that’s something we pride ourselves on.”
In 1986, Ballew noticed a trend of public companies buying up private, independent friction
companies. It was a trend that didn’t sit well with him, as he witnessed manufacturing short-cuts
occur as a result of these consolidations. It was during this business climate he decided to launch
NeoBrake.

“Starting out, we marketed CM Brake lining as a way to navigate shrinking distribution channels due
to these buyouts,” conveyed Ballew. “Once CM Brake was absorbed, things got tougher. That’s when
we found our own supplier and began formulating NeoBrake linings – a high-quality product back
then that we’ve steadily improved upon since.”

That improvement began in 1997 when Ballew traveled to Asbest, Russia to better understand how
asbestos worked in order to better replicate its effectiveness. He met with a team from Uraliti
Friction Manufacturing Company, who eagerly shared their knowledge and showed him the ins and
outs of their enormous operation. He recalls seeing some 200 presses under one roof, which
dwarfed the remaining four U.S. friction manufacturers who had 70-75 presses between them.
“The volume was a sight to see,” expressed Ballew. “As manufacturing dwindled here in the states,
we needed to align ourselves with global suppliers to stay ahead. We may be small, but our
experience and knowledge-base has taken us around the world.”

As outsourcing to China increased, Ballew set out on a global mission to find the ideal supplier in a
manufacturing environment suited to deliver the optimum product. His journey ended in India
where he not only found them but found manufacturing partners eager to adopt the American way
of developing friction. This was better than a win-win, it was a win for roadway safety, insists Ballew.

“We don’t have deep pockets for marketing,” said Ballew. “But we do have deep conviction for
developing the highest quality product available. Through our Indian partnerships, we have R&D
capabilities second to none. It’s enabled us to be successful these last 30 years, and why they’ve
grown to become leading suppliers in their own right here in America.”

NeoBrake plans to celebrate its 30th year over the next fiscal year through October 2019, spreading
special promotions throughout along with anniversary merchandise and gifts. For more information,
contact President/CEO Rick Ballew at 414-764-4211.