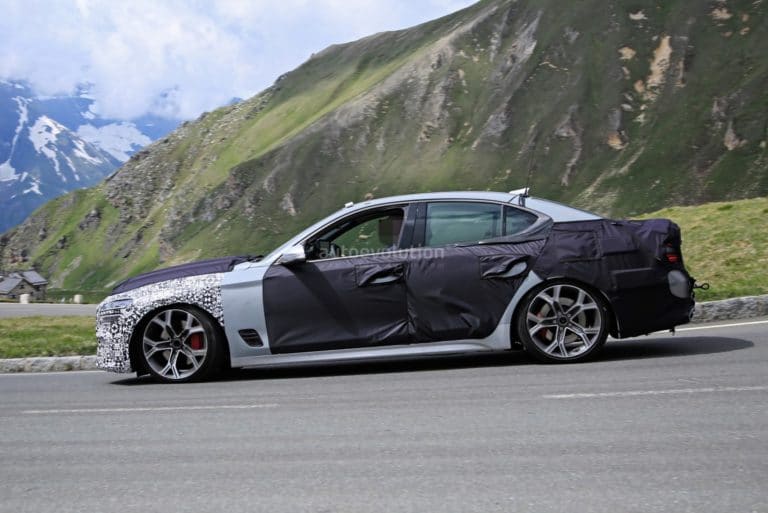 SEOUL – As you’re well aware, Genesis isn’t available on the Old Continent. Expected to roll out in 2021, the luxed-up brand is challenging the German triad with a myriad of products that undercut the competition in many ways.

Take the G70 for example. Not only does it cost less than the BMW 3 Series while offering more suck-squeeze-bang-blow and creature comforts as standard, but “the great disruptor” was crowned North American Car of the Year in 2019. And things will get even better in a few months’ time.

With the mid-cycle refresh, the G70 will adopt the latest styling language that Genesis has applied to the G80 and G90 sedans and the GV80 sport utility vehicle. Quad headlamps and a large yet elegant grille dominate the front fascia while the rear end is beautified by two oval exhaust pipes and LED lights.

The prototype the carparazzi have recently spied in Europe isn’t all Genesis, though. The five-spoke alloys come straight off the Kia Stinger, and as a brief refresher, the two of them are joined at the hip as far as the rear-wheel-drive platform and force-fed engine options are concerned.

High-altitude testing is an important phase of development, ensuring that the four- and six-cylinder powerplants are up to snuff in rarefied air. The winding pass roads in the Alps are also perfect to put those Brembo brakes through their paces, ensuring that fade won’t pose a problem to customers.

Speaking of Europe, the Genesis brand made an important move two months ago in this regard. Enrique Lorenzana has been appointed as head of sales and after sales in the Old Continent, a man who has previously held executive roles at Aston Martin and Maserati. The Spaniard has worked at Kia and Audi as well.