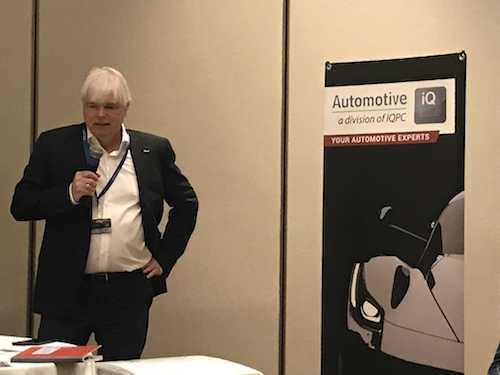 SOUTHFIELD, Mich– At the Intelligent Braking two-day conference here, there was a show of hands indicating that interest in Electro-Mechanical Braking systems is waning.

Dr. Hans-Jorg Feigel, President of Mando Corporation, who led one of the panels here asked for a show of hands on who thought EMB systems would be in all new cars by 2025. “Only about 10% of our attendees said yes, while that number was 90% a year ago,” he said.

Why? “I think that companies are becoming more risk-averse when it comes to technology that the consumer does not value,” he said. Buyers of cars do not care if the car is braking mechanically or by wire, just that it stops effectively when they want it to.”

Many companies have worked the technology into their vehicles to support other technologies they want to offer, especially in luxury cars. But many new cars are arriving in showrooms in 2020 without EMB.

Toyota has been implementing brake-by-wire on hybrid (and a few non-hybrid) vehicles in its Lexus brand for years. Alfa-Romeo has added EMB to its Giulia and Stelvio. The biggest recipients of EMB tech are electric cars and hybrids. That market is growing, but the interest in applying EMB to non-electric vehicles has declined, says Feigel.

Automakers are under increasing profit pressure despite a robust economy in North America. Auto sales are projected to trend lower in the next five years. Companies like Ford and GM are cutting white collar staff, and trimming unproductive factories to cope with declining sales, increased need in capital investment in EVs and self-driving tech, plus Trump administration steel tariffs have sliced into profitability.

“It doesn’t make a lot sense to invest in more expensive technology where it is not needed and is not valued by the customer,” says Feigel.

Brake-by-wire systems have quicker braking response than traditional mechanical brake systems. And they saves weight in the car. But it is an area that OE’s are reducing orders on except for new EVs and Hybrids, and luxury cars where companies, such as Audi, have made commitments to the tech that they are reluctant to back off of.

Intelligent Braking is a two-day industry conference produced by Automotive IQ at The Westin Hotel in Southfield, Michigan June 17-19.