DETROIT, Mich.–In the two first parts of the article, some aspects of the interaction between the chassis dynamics and the triggering, local and low-level stick-slip motion (found in the friction interface) have been introduced. The methodology has been revealed and some initial results, presented. This final part will show further results, together with the main conclusions that can be drawn from the investigation.

The high level of harmonic noise and vibration response of the truck is the result of a vibrational transfer of energy from short and low level stick-slip events into a global vehicle resonance that alters the normal performance of the brake actuator. The modal shape, along with the in-service vehicle vibration response seen through the RMA, suggest that the stick-slip mechanism is only a trigger of the truck ungoverned response, being this response controlled by a combined front axle steering / suspension resonance, that causes an S-cam oscillation due to a forced vibration of the brake chamber assembly (precisely induced by such resonance). This idea of how the initial stick-slip vibration excitation and the vehicle resonance at 68 Hz interact to generate a tonal response of an extremely high level is schematically elaborated in the following block diagrams.

Under normal conditions, some air pressure operates the brake chamber’s push-rod, which leads to the rotation of the slack-adjuster and the S-cam, thus forcing the shoes to move against the drum, initiating a steady-state braking torque: 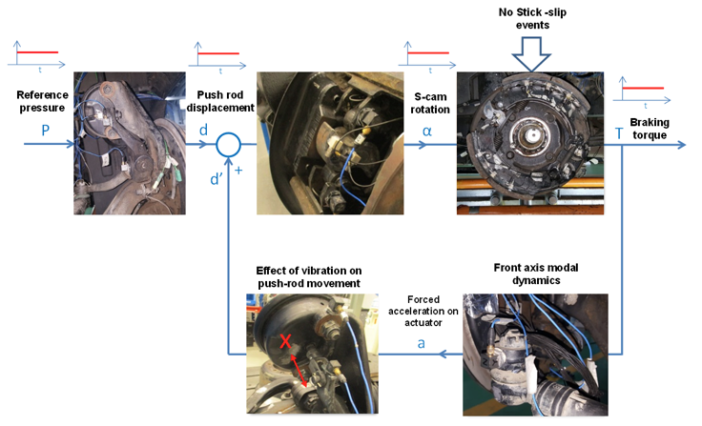 As the stick-slip mechanism is triggered, a certain perturbation is applied at the brake block. This means that the braking torque is made up of a constant component —similar to the one observed in the previous slide— and a fluctuating component —precisely caused by the stick-slip event: 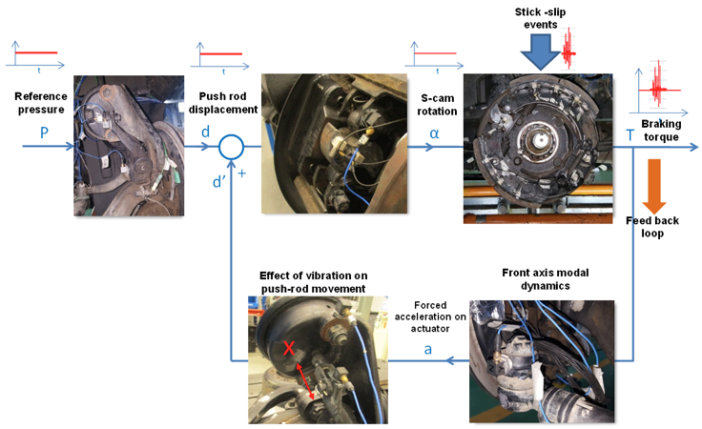 As the creep groan evolves to the charging phase, the so-called feedback loop is activated: the brake torque initial perturbations excite a combined front axle steering / suspension resonance, which induces powerful wheel rotations about the king-pin axis and the stub axle. This rotation (at 68 Hz) imposes a shaking effect on the brake chamber that generates a high relative displacement with its push-rod (“D” prime): 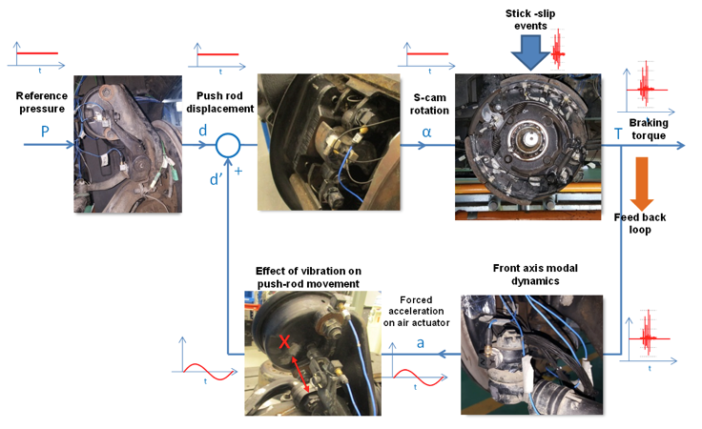 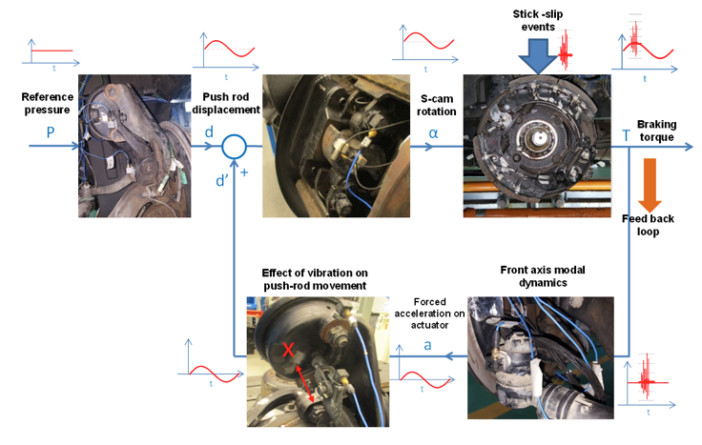 Under this situation, creep groan becomes unstable: the vehicle resonance, initially excited by short stick-slip events, tends to absorb all the triggering energy into modal behaviour and generates a tonal response of exponentially-increased amplitude. It is the mechanical gain of the feedback loop that leads to an unstable vibration condition, regardless of the stick-slip mechanism: 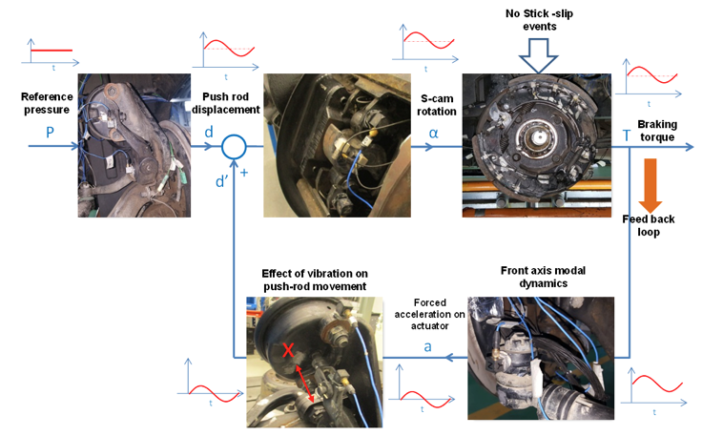 This article proves the existence of a positive feedback loop that activates the S-cam under creep groan vibrations. The exponential increase in noise and vibration levels, from the triggering phase to the unstable condition, is then caused by a self-sustaining excitation of front steering/suspension resonance. The tonal response is centred on the frequency of the resonance, which takes complete control of the creep groan vibration —independently of the stick-slip mechanism.

It can be concluded that the strategy to attenuate creep groan amplification can be stablished at various levels: acting directly on the incipient stick-slip or working to decrease the positive gain of the feedback loop. Certainly, future work is to reduce and, if possible, decouple the interaction between the front axle modal dynamics and the resulting vibrations exhibited by the brake actuation system. This should diminish the gain of the loop, or even interrupt it, so the vibration amplification process can be kept under control.