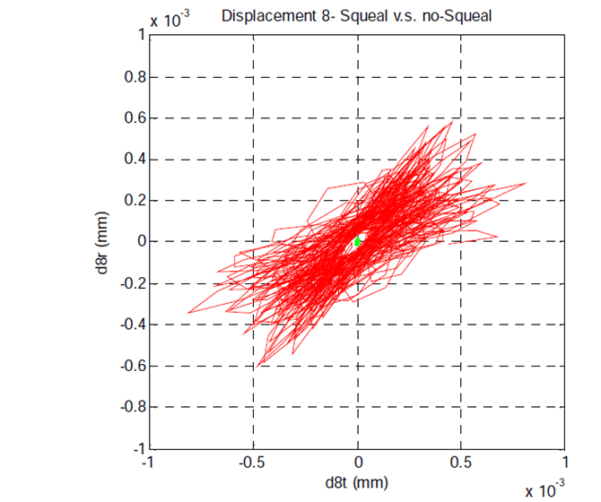 Generally, brake drum shoe vibration behavior under squeal conditions is analyzed investigating the structural modes involved at the frequency of interest. This approach is limited when one wants to understand the fluctuating interaction between the brake shoe and the drum. Thus, the objective of this work is to present an experimental methodology that allows a holistic interpretation of the in-service movement of brake components under squeal conditions based on fluctuating acceleration data. The analysis proposed herein has been applied to a primary shoe of a drum brake under squeal conditions and reveals a clear evidence of the complex movements that intrinsically cause the alternating excitation responsible for the brake squeal. The correlation of the methodology presented here and the more traditional running mode analysis is also demonstrated.

Note that mono-axial accelerometers were glued to a high temperature resistance cubic base in order to align the accelerometer’s axes with the desired directions to be investigated on the brake shoe and to reduce electric noise in the acceleration signals.

In the calculations reported in the following part of the article, the global axes depicted in figure 1 (orange arrows) will be transformed into the local coordinate axes shown (red and yellow arrows). Figure 2 also shows the local systems of coordinates (green arrows) that will be used to calculate the rigid body movement associated with the brake under squeal conditions.

A preliminary analysis, using various independent techniques, of the vibration and movements patterns for the upper and lower shoes depicted in figure 2, showed that the lining areas more likely responsible for the excitation of the squeal phenomenon are close to point 8 in the lower shoe. Thus, for the sake of simplicity in this work, we will focus our description of the applied methodology to the measured data corresponding to points 7 and 8 in the lower shoe. The conclusions presented here however are completely general and can be applied to any other point or drum brake.

As an example, figure 3 shows the color maps of the time histories of the accelerations measured with the accelerometer 8 during squeal. The figure depicts the calculated displacement of this point in tangential and radial directions. These displacements have been obtained by double integration of the original acceleration signals. This figure clearly shows the existence of an intermittent squeal ay 7.7 kHz