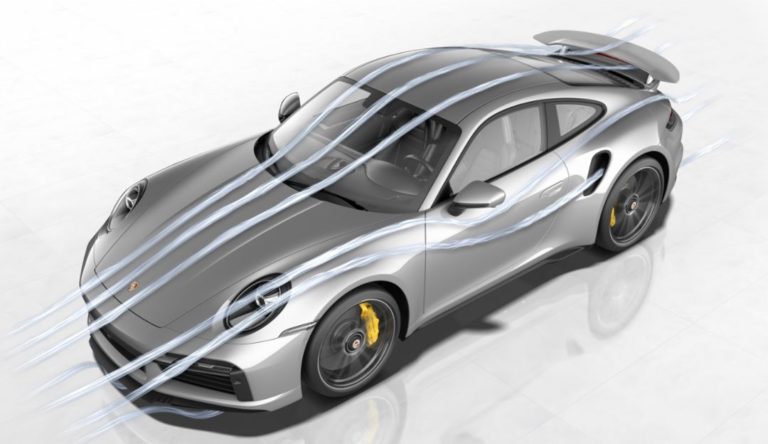 ANN ARBOR, Mich. – The majority of the subjects covered in The BRAKE Report have revolved around aspects of the friction world. When appropriate, we have explored alternatives like regenerative braking which is a factor in the electric-vehicle pantheum. Below is a post from Car and Driver on Porsche’s including an air-brake function to the aerodynamic design of its new Porsche 911 Turbo S.

Porsche has been tinkering with active aerodynamics on the 911 since it launched the now familiar pop-up rear spoiler on its core sports-car line more than 30 years ago, a feature that has continued in every generation of the 911 since.

But the new 911 Turbo S features considerably more adjustability and now has three moving elements. The electrically controlled rear wing can extend by as much as 3.9 inches and also tilt forward in multiple steps to as steep as a 10.5-degree angle; flaps in front of the radiators on each side of the front end can open and close; and the front lip spoiler, which consists of three separate sections, is extended into multiple combinations by the force of compressed air from a small onboard compressor.

This makes for a host of possibilities based on speed and the mode selected. For example, in Normal mode, the front flaps are open at low speeds, are regulated based on cooling needs between 43 and 93 mph, and then reopen above 93 mph. The rear wing stays put until 112 mph, when it extends. In Sport mode, the front spoiler comes into play, extending at 75 mph, the same time as the rear wing. Sport plus gets more aggressive with the rear wing, extending higher and tilting forward to its maximum angle at 9 mph, while dialing back the angle slightly above 160 mph.