BARCELONA, Spain–Brake maker GALFER has launched a new ad campaign touting its products as benefitting from many years of studying, testing and developing brake products in the MotoGP most important international racing cycling and motorbike circuits of the world. 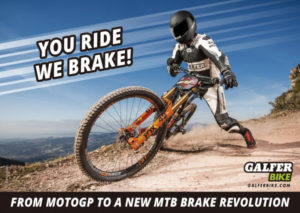 “YOU RIDE WE BRAKE” is what GALFER has been doing for years, celebrating world titles by riders as great as Marc Márquez (2010-2012) or Jorge Lorenzo (2006-2007) at the start of their MotoGP sporting careers; four-time Enduro world champion Steve Holcombe (WEC); six-time Motocross world champion Kiara Fontanesi (WMX); or 25-time Trial world champion Toni Bou (WTC). These are great names of the international motorcycle scene that help develop GALFER brake products.

The bicycle business benefits too from the contributions of top competitors and technical knowledge accumulated around cycling circuits. The ads feature images of a mountain biker dressed as a motorcyclist with a DH bicycle at the edge of a cliff. “We realize that both motorcyclists and cyclists want safe and powerful braking so they can make a difference both in racing and everyday use,” the company said.

Galfer was the first manufacturer in the world to introduce mass production of brake discs and pads, back in 1998. The company’s history goes back 65 years.