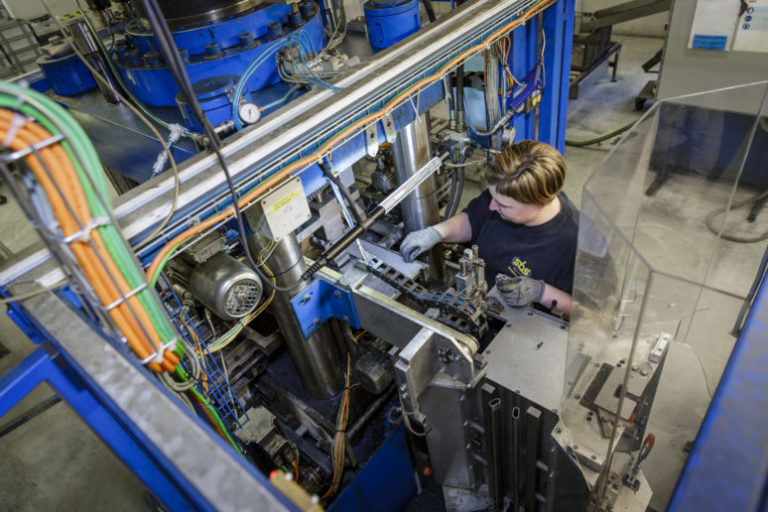 SBS FRICTION AT A GLANCE

Christel Munk Pederson is the Chief Sales Officer for SBS Friction. She has spent 22 years with the company.

During that time the motorcycle aftermarket has grown from “a very young industry to quite a mature industry with different challenges,” she says.

And Pedersen is also is well aware of the history of the company before she joined, going back to how SBS first entered the motorcycle aftermarket.

She explains that in the late 1960s, Honda pioneered motorcycles that used disc brakes, “which everybody was sure were not at all suitable for motorcycles, although I guess today proved them wrong.”

At the time, SBS made brake shoes for cars. “We had some people here developing friction lining materials. And one of them had a deep motorcycle interest. And he had this Honda, and he thought, ‘Well maybe I can mix up some stuff and make my motorcycle brake better,’” Pedersen says.

“So he put a new formula together based on his chemical experience within automotive brake shoes. … He developed a brake pad and he started riding his bike and he was happy with what he had. It started, you could say, by coincidence.”

The brake pad aftermarket “really became a volume business in the early ’90s. It takes time before the volume is out in the market and the OEMs aren’t able to cover that anymore.”

The early beginning gave SBS a meaningful advantage since it was able to grow as the aftermarket grew. Pedersen explains that if a new business wanted to enter the market today, it would have to build all the tools and production equipment, and “today it’s no longer for 10 references. It’s for maybe 650 different references in 10 to 15 different compounds with three different production methods.”

All Under One Roof

SBS is located in Svendborg, Denmark in a single building. According to Pedersen, keeping everyone under the same roof is a core part of SBS Friction’s culture and business strategy.

“The product is developed here,” she says. “We have an R&D department with 7 people – chemists, engineers, test drivers. And also of course the production engineers that do the crossover implementation into production are here.”

SBS makes sintered, organic, racing, and wind turbine materials. “So we have four different production methods under one roof, which makes us extremely flexible,” she says.

“We’re extremely flexible. If we see any kind of new motorcycles out there, new brake systems out there, making that relevant part is something we can do with very short timing with everything in house.”

When asked how often she is on the production floor, Pedersen replies “Every day! That’s my reason to be here.”

Overall, SBS boasts 1,800 SKUs divided into 12 different friction materials. Its pads range from high-end racing compounds to OEM replacement parts to a track-day compound that allows a rider to ride a motorcycle to the track, race, and ride home.

Racing is a major part of the SBS brand and business. It has actively participated in World Superbike, Flat-track racing, MotoAmerica, World Endurance, Moto2 and Moto3, and other series. “We have a race manager who works directly with those teams,” Pedersen notes, explaining that often SBS is the only friction company in attendance.

SBS Friction produces racing pads at a price point where “racers without a sponsor can still afford to buy them,” and race fans can buy the product for their own bikes. These high-end products are “a very substantial part of the business today. And we are proud of it,” Pedersen says.

Although Pedersen does not ride, she is quick to note that many people at SBS Friction do. “Our race manager just won the Ducati Challenge in Europe. He’s a really good road racer. We have a Danish 17-time motocross champion, as well, as product manager.”

SBS recently announced that it is using NRS Safe technology, licensed from Nucap, on all of its pads.

The relationship between SBS Friction and Nucap goes back many years. SBS Friction was the first motorcycle pad company to work with Nucap. Pads with the NRS Safe technology first went into production in 2001, starting with SBS Friction’s more high-end applications.

Pedersen cites safety as the primary driver of the choice: “No manufacturer of organic brake pads globally can look anyone in the eye and say they’ve never had a friction material fall off the backing pad.”

Looking forward, Pedersen is excited to see how the motorcycle industry changes over the next few years. Electric motorcycles have a huge amount of potential, and new regulations will impact the industry. In particular, Pedersen points to Europe’s ECE R90, calling its recent application to the motorcycle industry a game changer. This regulation requires that products pass strict testing before  being sold in the aftermarket. “I do see an opportunity there for serious companies who have actually made products specific to OEM standards and actually tried to increase performance and lifetime in OEM products,” she says.

She’s also excited about the possibility of motorcycles helping to solve congestion problems around big cities. “For the first time in many years, we hear communities talk about motorcycles as part of the solution not only part of the problem,” she says, noting that if you take 10% of cars and replace them with bikes, you solve 40% of congestion issues. “Imagine the potential that holds for our industry — and for societies loosing productivity in cities all over the world today,” she adds.