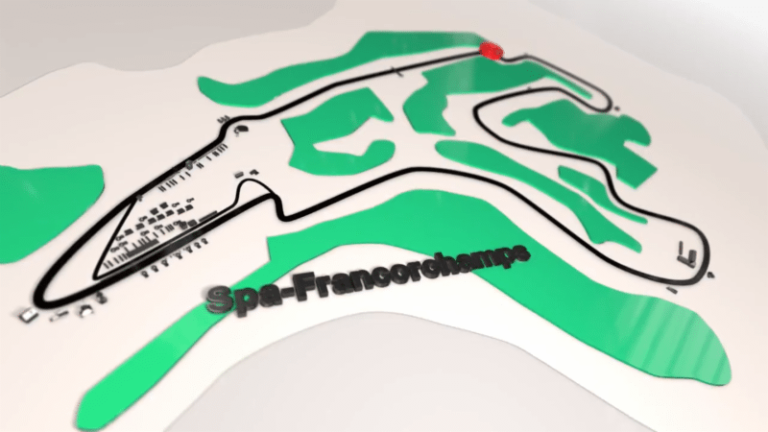 DETROIT, (August 23, 2018) – After the long summer break, Formula 1 is starting back up and as per tradition, the engines will fire-up at Circuit de Spa-Francorchamps, home of the Belgium GP, August 24-26 in the 13th race of the 2018 World Championship.
Nestled in the Ardenne hills, it is unanimously considered the most complete track in the World Championship for its combination of fast turns, blind corners, elevation changes and infinite straightaways. This is the 51st time Formula 1 has returned to the track, but the circuit has changed dramatically over the course of the years: since 2007 is has measured 4.3-miles, making this the longest track in the World Championship. It stands out for having 19 turns, yet it only has four braking sections characterized by extreme outputs of energy. The cooling off of the braking systems is guaranteed by the presence of big, fast corners like Eau Rouge and Blanchimont, where the brakes aren’t touched at all. The unknown variable is the weather: Last year, the air temperature reached 75.2°F but in 2014 it didn’t go over 60°. According to Brembo technicians, who have classified the 21 tracks in the World Championship, the Circuit de Spa-Francorchamps is one of the least demanding on the brakes.

The demand on the brakes during the GP

Even though it is a really long track, the brakes are used barely eight times per lap, just like in Barcelona except that track is 1.4-miles shorter. Additionally, two of the eight braking sections on the Belgian circuit last less than one second. Which explains why the brakes are used for less than 13 seconds per lap, (13 percent of the race). The mean deceleration per lap is 4G. The average is lowered by the braking in sectors two and three, with the exception of the chicane at the top that was once called the Bus Stop (Turn 18). Obviously then, the energy each car dissipates in braking during the entire GP race is lower than at other tracks: The total of 135 kWh here is just a little more than half of the energy dissipated on Hungaroring. Still, this amount is equivalent to what nine medium-sized spa tubs consume on daily basis. From the starting line to the checkered flag, each driver will exert a total load of 41 metric tons on the brake pedal. Although lower than other GP races, it is still a sizable force that is equivalent to 0.55 ton for every minute racing.

The most demanding braking sections

Of the eight braking sections at the Circuit de Spa-Francorchamps, four are classified as demanding on the brakes, two are of medium difficulty and the other two are light. The toughest on the braking system is at Turn 5: The single-seaters arrive going 193 mph and decelerate to 104 mph in just 97 yards. The Formula 1 drivers only need to brake for 1.60 seconds, but they have to apply a force of 302 lbs. on the brake pedal and they experience a deceleration of 4.6G. Another noteworthy braking section is at turn 18 because in just 142 yards, the single-seaters have to decelerate by more than 124 mph to go from 186.4 mph to 49.7 mph. The force on the drivers is higher: They apply a load of 313 lbs. on the brake pedal and experience 4.6 G in deceleration.

Single-seaters with Brembo brakes have won 24 of the 41 GP races in Belgium that they took part in.

Brembo SpA is the world leader and acknowledged innovator of disc brake technology for automotive vehicles. Brembo supplies high-performance brake systems for the most important manufacturers of cars, commercial vehicles and motorbikes worldwide,as well as clutches and other components for racing. Brembo is also a leader in the racing sector and has won more than 300 championships. Today the company operates in 15 countries on 3 continents, with 25 production and business sites, and a pool of over 9,800 employees, about 10 percent of whom are engineers and product specialists active in the R&D. 2017 turnover is € 2,463.6 million (12.31.2017). Brembo is the owner of the Brembo, Breco, AP, Bybre, and Marchesini brands and operates through the AP Racing brand.