By The Brake ReportAugust 29, 2018No Comments4 Mins Read 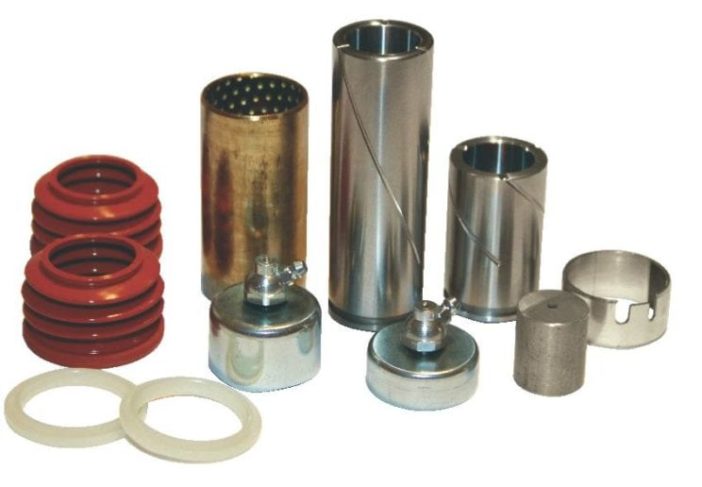 Fleets that are running air disc calipers may enjoy better stopping and quicker brake changes, but they don’t enjoy seizing calipers that cause increased maintenance and potential wheel end fires.

Guide pins (the mechanical pins that allow the caliper to slide back and forth and provide clamping force) are rusting and their grease is turning to tar under high temps, according to John Kelvin, Vice President of Product Development for Ascent Tranz Group.

Ascent Tranz Group now has a patent pending on its new CL-20 guide pin kit that re-engineers caliper guide pins so users can lubricate them during preventive maintenance cycles.

Branded under the name A-LINE®, the CL-20 kit allows continuous lubrication of the guide pin and will deliver up to 20-times the amount of grease that OE designed pin kits allow.

Kelvin says the idea came after meeting with fleet managers who complained their calipers were failing unexpectedly, and they were frustrated at the inability to lubricate the mechanism.

“They would turn to me and say, ‘I am qualified to rebuild a diesel engine, but the caliper OE doesn’t think I can lube a caliper.’”

Kelvin said he took their frustration and met with his technical and engineering staff. After one year of product development, the CL-20 kit was born.

In order to lubricate the guide pins without causing other problems in the caliper, the team at Ascent Tranz Group grooved the guide pins to receive grease. Then they re-engineered the sealing caps to mount a hydraulic stop valve that would allow grease into the valve, but shut down when a specific back pressure is reached.

“The stop valve was extremely important,” says Kelvin. “That’s what keeps the tech from over-greasing the caliper.”

Other mechanisms, including a lubrication directional plug and specialized grease were designed.

Even the Grease Was Completely Re-engineered

“We had to completely re-engineer the grease for this application,” he says.

Kelvin is referring to A-LINE’s MAX-A-SIL 998™ silicon/Teflon-based grease. The OE and aftermarket greases were turning to tar at 220° – 270° C. There was no lubrication value remaining once they reached 350°C.

That’s bad news when the disc-torotor contact temperatures sometimes exceed 1,500° F. With those kinds of temps, excessive braking will burn out the OE-designed kits.

How Will This Change the Air Disc Braking Industry?

Now that fleet managers can manage the lubrication of their air disc calipers, they can cut down on costly caliper failures that leave loads stranded on the side of the road while maintenance bills pile up.

Trailer owners will especially appreciate the kits. Air disc trailers have a reputation for seizing guide pins if the trailer sits as a storage trailer for too long.

The CL-20 kit solves that problem and gives fleets a full range of vocational use for their trailers.

The CL-20 kit is available as a maintenance kit for fleets that replace their own guide pins. It is also available as an option installed in reman calipers through Ascent Tranz Group.

Is the CL-20 Kit Available on OE Applications?

Currently, the CL-20 kit is available in aftermarket kits only. Kelvin says his company is in discussions with an air disc caliper OE, but would not elaborate.

Which Caliper Models Does the CL-20 Kit Service?

Currently, the CL-20 kit services all models of Bendix® ADB22x™ calipers, the Knorr Bremse® SK7™, SN7™ and ST7™ calipers. Kits for other manufacturers and models are expected to be introduced in late 2018 and early 2019.

The company is headquartered in Cambridge, Ontario, Canada with offices in Canada and the USA.